(apologies for the lack of photographs, my phone died right after I took the exterior photos)

Pleasant View Library is a neighbourhood library in the North York Region, which was opened in 1975. Originally, it was part of the North York Public Library system until amalgamation of the Metropolitan Toronto System and the North York System added multiple branches. It was retrofitted in 1995.

This Branch is located near a vibrant Chinese-Canadian community, especially in the Van Horne area. In response to the community, the Library has a large print collection in both Chinese and French. The Library also offers the usual non-print holdings, such as Pedometer Lending and Audiobooks.

The building itself, does not appear to be particularly remarkable, as its non-descript brick exterior is meant to match the community centre it is near. Though the exterior of the building sits non-offensively in the neighbourhood, the interior treats patrons to a whimsical and somewhat unusual space. The Children’s section in particular includes whimsical arched frames of animals, in characteristically 90’s kitschy painted columns.

Perhaps the most interesting features of this Library may be the fact that as a neighbourhood library, it features an auditorium and a kitchen. The auditorium is very large, and can hold up to 170 audience members. Auditoriums are rare amongst non-district libraries, and the Branch conducts much of its programming for the community here. Kitchens are also a feature of a bygone era, as these are certainly not essential or installed regularly in many other branches. 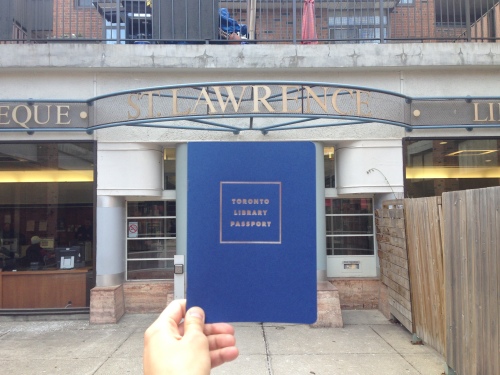 St. Lawrence Library is maybe one of the most interesting neighbourhood libraries I have encountered yet. The Branch opened in 1982 on the rented premises. It has been in operation here ever since, with a short closure for renovations in 2002. 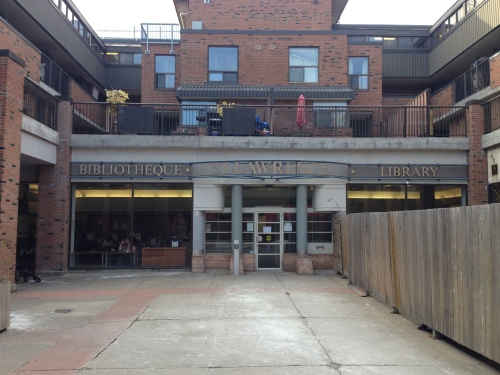 The Library is not particularly remarkable on street level. In fact, there is no entrance where you would expect, on Front Street. Instead, you have to enter a residential courtyard to get to the main entrance. This was because when the Library was opened there was almost no pedestrian traffic on Front Street. The Children’s Collection and programming space allows for unobstructed views of the street, perfect for a quiet read or people watching.
The history of the surrounding area is just as strange and delightful as this quirky Library. The St. Lawrence community was

planned, as previously there was only industrial and transportation infrastructure in the area. This changed in the 1970’s, when City Council decided to redevelop the area into a mixed use neighbourhood. The City envisioned an area of “true diversity”, an area where residents interacted regardless of socio-economic status.

Due to this decision, integration is very even, thus making it difficult to find a defining feature of the Library’s collection. There is a small Local History selection, which is worth a look. I believe that the unremarkable-ness of the collection reflects the reality of the success of this mixed use development.

Up to the point of this writing (January 2016), St. Lawrence remains a neighbourhood library. However, there have been plans since 2010 to redistribute library resources in the area. With the on-again off-again talks of First Parliament Place, St. Lawrence may be closed or relocated in favour of a larger district library in the new site. Although infamous for its sluggish decisions and development rates, if you want to see this fascinating little library, I would recommend you go visit sooner rather than later.

Special thanks to Dulce Gomes for the tour of the library and an incredible explanation of the community!