City Hall Library is often overlooked, as it is in an area that one would not expect a library to be. It houses a smaller collection of items, but notably a large selection of Chinese language materials. This is due to the location’s proximity to old Chinatown in response to its users. 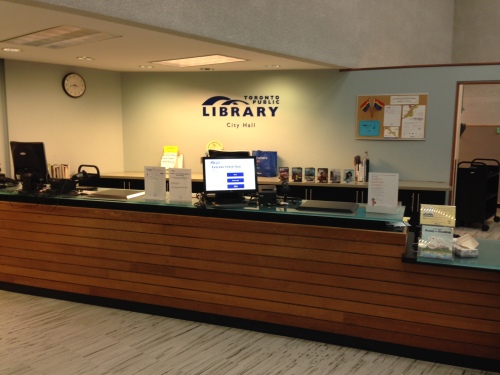 Courtesy of the Toronto Public Library

The Library itself has a surprisingly long history, starting life in 1911 as the Municipal Reference Library. The Municipal Reference Library closed in 1928 and did not transfer to New City Hall until July 1, 1992. Although its space and its hours have been reduced, the library still sees a vibrant community of users who use the library as a community development resource. Can’t you just imagine Rob and Doug Ford passing by this library branch everyday, muttering angrily to themselves?

This is a community resource especially for the community facilities operated by the city. Here you will often find storytime programming and other early childhood literacy programs despite the relatively small collection of children’s materials. This space also offers study spaces and both one hour and fifteen minute internet work stations. The City Hall Library also happens to offer most of the museum passes available through the Toronto Public Library.